This is actually a two-item post. In early November, the ShowBiz Entertainment Complex opened in Homestead. We did several articles about it for the paper and it is impressive. The company has quite a few movie theaters in multiple states, but only five of these complexes, and ours is the first one in Florida. When you enter the complex, there are thirteen bowling lanes to the right, an electronic arcade to the left and a full bar in between. In addition to the standard concessions, there’s also an ice cream and coffee bar and a cafe that serves a nice menu. Beyond all this are ten movie theaters; one of which is equipped with a very high tech system, SDX. All the theaters have Dolby sound and big screens though so any of them present quite the experience. I was going to go with Hubby a couple of weeks ago to actually watch a movie, but some kind of last minute crisis interfered. Son and daughter-in-law had “date day” while they were here and went to see Star Wars. The plan to take granddaughter New Year’s Day didn’t come about as other things took priority. Anyway, I finally went with Hubby this week to see Star Wars. The reclining leather seats are quite nice and the fact I could take in my glass of wine was even better. Each seat has not only a cup holder, but also a tray to comfortably hold items.

Now onto the movie. Since we are of an age to have seen the original Star Wars, that puts us in a different category than the kids. I will acknowledge still being somewhat confused with prequels and sequels that make up what I think are now nine movies total. It’s been interesting watching the original stars age as they have and of course the unexpected death of Carrie Fisher three years ago was especially poignant in seeing her on the screen. It’s difficult to know how many young girls have been influenced by her role as Princess Leia. The movie, Rise of Skywalker, was true to the format and the special effects were amazing as always. I really do think it can come to a close now, but Hollywood may well have other ideas. 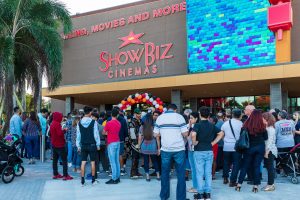 There was a big crowd for the ShowBiz ribbon cutting.