There is a fairly lengthy explanation on my web site about Gun Mounts and Groupers: Inside the USS Spiegel Grove, a new non-fiction book that will be out in November. The short version is that Don Altemus, a Miami banker and underwater photographer, kept after me until we finally sat down and worked out what seemed to be a logical approach to the book. There are two groups that have a special interest in the Spiegel Grove – those who served on her and those who embrace her today as an incredible artificial reef. Finding a way to bridge those two groups and keep a photo-heavy book at a reasonable price posed some difficulty. After much thought, the end result is a 53-page, soft cover book with 14 photos and 1 illustration. (Most of the photographs are from Don.) The book provides the essential history of the ship, the transformation into an artificial reef, and a level-by-level discussion of her as a dive destination today. In the process of writing the book, I was invited to be the guest speaker at the 2011 Spiegel Grove Reunion Association meeting in Jacksonville, Florida this past Saturday. My husband put together a video of several sections of the ship, and as it turned out, Don Altemus was able to join us.

There were approximately 50 people at the reunion; to include some who served on the Spiegel when she was first commissioned and at least one gentleman who was on the ship during her final active duty days. The men and their wives were so much fun and Don had gone to a great deal of trouble to have copies of some detailed engineering plans available. We spent most of Saturday with the plans spread out in the lounge of the hotel and a spiral-bound proof of the book so they could have some idea of what it would be like. Don and my husband were given some incredible insights into the workings of the ship from engineering and operational perspectives and I was treated to more great stories.The evening was enjoyable and after the presentation, I think that most of the attendees who had felt a pang of loss at the idea of their ship being deliberately sent to the bottom of the ocean came to see how highly regarded the Spiegel is now as an artificial reef. It was a rewarding experience for the three of us and we hope that we can sustain the relationship that we made with the group. 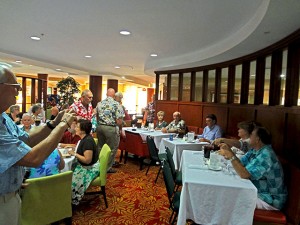 Attendees to the 21st Spiegel Grove Reunion came from every part of the country for the multiple day event.

6 thoughts on “A Gathering of USS Spiegel Grove Veterans……..”