Okay, I didn’t manage my birthday dive and I don’t usually go out on the weekend because of crowded boats. Saturday, however, the morning boat was within the number I’m happy with, although the afternoon was predictably booked solid. Hubby was teaching a family of three, plus a friend of the daughter. Visibility was still limited for us due to recent algae blooms, but had gotten to 45-50 feet. That’s one of those relative factors as individuals who dive in other parts of the country are lucky when they have 20 feet of vis.

We did two of the “real wrecks” as in neither was deliberately deployed. They are near each other and both went down in the early 1900s, They weren’t very big and with a century and more of storms and being in warm water, there isn’t much that looks like a vessel. Scattered pieces provide shelter for marine creatures though so you always look underneath to maybe find an eel or lobster. There are also reefs (cause of the original wrecks) for more marine life and nice coral. We did get a couple of small Caribbean reef sharks on the first dive and I saw my lovely rock beauties as well as plenty of the regular inhabitants. Others saw an eagle ray, eel, and turtle. There were quite a few jellyfish. Those are at or near the surface and while they do sting, if you push them away with the back of your hand, that generally moves them and you don’t really feel the sting. They keep a vinegar-based spray and a gel on board. The husband of the family Hubby was teaching wasn’t wearing a full wetsuit and his wife was worried about the jellies. He put himself between her and them and did need his legs sprayed when they got back on board.

A very special treat on the second dive was Hubby spotted a Queen Triggerfish. They are common in the islands, but we rarely see one here. The photo below is not from here, but it’s the only one I have of the kind of jellies I am talking about. 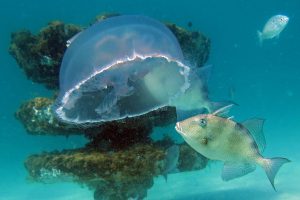