I’m a day later than planned posting because things finally came together for me to do an afternoon dive yesterday. That makes three months in a row I missed and almost four. As I have explained, I often miss out Jan and Feb. March was difficult this year for several reasons; however, conditions were the best they have been in days with basically flat seas and no surge. 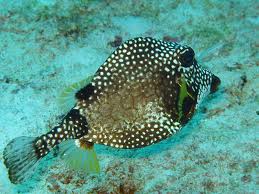 Hubby was teaching four students who he will finish up today. I don’t recall where they were from, but they were all pleasant and seemed to be having a good time. Conditions underwater were nice even though visibility was a bit better on the first dive. Although there was nothing really special on the first dive, there were enough of “the usual suspects” to enjoy and I did find them a large trunk fish like the one in the photo.

On the second dive I found an arrow crab which I haven’t seen in ages. I wasn’t close enough to the students to get them back to see it and Hubby had them at a coral cluster where there were two anemones almost touching. That is unusual to have two so close together. Not long after, I spotted a medium size Southern stingray nestled into the sand. We were careful enough not to disturb it into swimming away and everyone got a good look. I did see all three types of angel fish on that dive, too with a queen angel making an appearance as I was finishing up my dive. The water temperature is headed in the right direction at 77 degrees. I was a little ambitious in wearing my 1 mil suit instead of the 3 mil though. I did have to do few loops swimming faster to take the chill off.