With my upcoming trip, I was concerned that September might slide by without me getting into the water. I do normally avoid diving on the weekends as it tends to be more crowded on the boats, but yesterday worked out. In fact, there were several Horizon Divers “family” (in one case literally) on board. Hubby had students for the morning dive and stayed down as I joined him for the afternoon. The water temperature was still good, there was basically no wind and it was mostly sunny. Visibility was pushing seventy feet and even though we didn’t see anything “big”, the usual array of marine life was around. The “bonuses” were a nice green moray eel and a small spotted one on the first dive, then a reef squid and a large scorpion fish on the second. We think Hubby got some good photos and won’t know for sure until he has a chance to process them.

There was a bit of current on the second dive although it was quite manageable and no surge. The elkhorn coral on the second site is some of the best in the area and I did find yellow-headed jaw fish on both dives. They are some of the most enjoyable small fish to observe and I’m sure Hubby has lost count of how many photos he has of them. The phosphorescent  blue chromis are other favorites of mine and I even saw some juveniles which are really small. A couple of people did see a reef shark, but missed the squid. That’s often the way with dives as everything depends on where you are at any given moment on a site. I was able to point put the green moray to two different sets of divers to “share” the find. 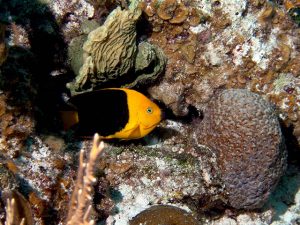 Rock Beauties are the smallest of the angel fish we have on our reefs. 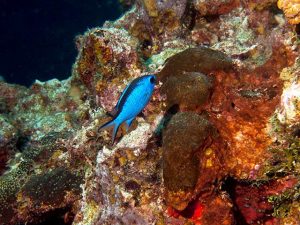 Chromis are seen on most of the local reefs.