I was able to make my March dive although I did cut it close being the 29th. Hubby has been working multi-day stretches as it’s the time of year with “rolling spring breaks” where different parts of the country take off at different times. It’s always popular to dive here then, and of course some overseas destinations not yet open. That means divers who might go to the Caribbean are opting for Key Largo. Since Easter is early this year, that also means there will be divers and snorkelers who specifically want to go to the Christ of the Abyss site. I’ve posted before that it’s one of several statues placed underwater by the Cressi family in honor of I think it was a son who died. (They’re a big name in scuba equipment). I’ve forgotten how many statues there are, but it is a concrete robed figure on a rectangular pedestal with his arms outstretched upward set at about 20 feet deep. It’s used on many underwater ads for the area and is something to be seen. The drawback is because of being shallow and such a popular site, it’s usually crowded and often low visibility, as well as surge (which rocks you back and forth and can cause sediment to be kicked up reducing the visibility even more). Additionally, the actual reefs around it aren’t very good from a marine life perspective. Anyway, several people on the boat yesterday were hoping for the statue, but reports were poor visibility so Captain D broke the news and took us to one of the outer reefs.

Although the water is still cool, the visibility was excellent on both dives.  Since I didn’t see the small goldentail eel tucked into the rocks, there was nothing extra special for me. However, there were plenty of fish to include some of my favorites and a couple of older conch shells that had lost their colors. Even so, they still have the distinctive shape. 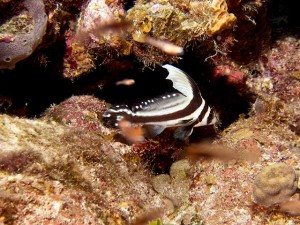