I knew the odds were Hubby would eventually want a drone. I suppose we loosely categorized it as his present for his birthday/our anniversary since the two things are about a month apart. You probably can’t see it well in the photo, but I can’t find the shot he took of just it. So, as it turns out, not surprisingly, there are all sorts of different license categories. In his case, since he will use it at times in a commercial capacity, he fell into whatever category that is. It included him having to take a particular test that was administered at our small airport at the Executive Jet Center.

There are all sorts of restrictions – as there should be – about heights you can fly the drone and obviously places. Interestingly, they are prohibited in National Parks. Apparently, when they first became easily accessible, there was real or perceived  harassment of wildlife to bring about the rule. He studied up for his test and of course did well and his real card came in yesterday to take the place of his temporary. His first “commercial” use of it was for the December 5th, Holiday on Krome Ave Drive-thru Parade where he did get some great aerial shots.

Roughly speaking, he can shoot from I think it’s 400 feet and down. Because of our closeness to Homestead Air Reserve Base (HARB), large sections around here fall under extra restrictions, but as with so many things these days, there in an on-line form to fill out to receive permission to still fly within certain parts. Downtown Homestead falls into that sector. It is several miles from HARB, so permission is pretty routine. It really is too bad the kids aren’t coming this year for the holidays; I can just imagine how much drone flying would be going on. And no, I have no interest is messing with this thing. 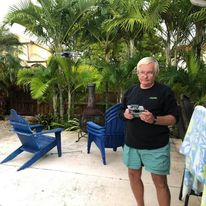